TREAT ‘What to measure’ – eDelphi exercise and consensus meeting

As a first step on our journey, we conducted an international eDelphi exercise and a consensus meeting among 410 dermatologists, nurses, non-clinical researchers involved in AE, pharmaceutical industry representatives, regulatory body representatives and patients from 36 countries, including members of the International Eczema Council (IEC), the European Taskforce for Atopic Dermatitis (ETFAD), and the International Society for Atopic Dermatitis (ISAD). The study identified a final core set containing 19 domains with 69 domain items to be captured by national AE systemic therapy registries (Gerbens et al., 2017; Gerbens et al., 2018).

Round 3 percentages per domain item per stakeholder group

TREAT ‘How and when to measure’ – consensus meetings

Further work has been performed to define how these 68 domains and domain items should be measured. Three round table consensus meetings have taken place in London (27th March 2017), Amsterdam (15th May 2017) and Nantes (12th June 2017). A consensus was reached for all domain items on how they should be measured by assigning measurement instruments. A minimum follow-up frequency of initially 4 weeks after commencing treatment, then every 3 months while on treatment and every 6 months while off treatment was defined (Vermeulen et al., 2019).

The paper summarising the results has been published, see Vermeulen et al., 2020.

Eligible patients are children and adults diagnosed with AE who are starting on photo- or systemic immuno-modulatory therapy (conventional immunomodulatory therapies as well as new biologics and small molecules), taking into account the national and local eligibility criteria for these specific therapies. Patients will be followed independently of stopping therapy or subsequent switch to other therapies.

The protocol of the registry has been published, see Bosma et al., 2019. 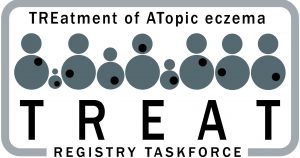